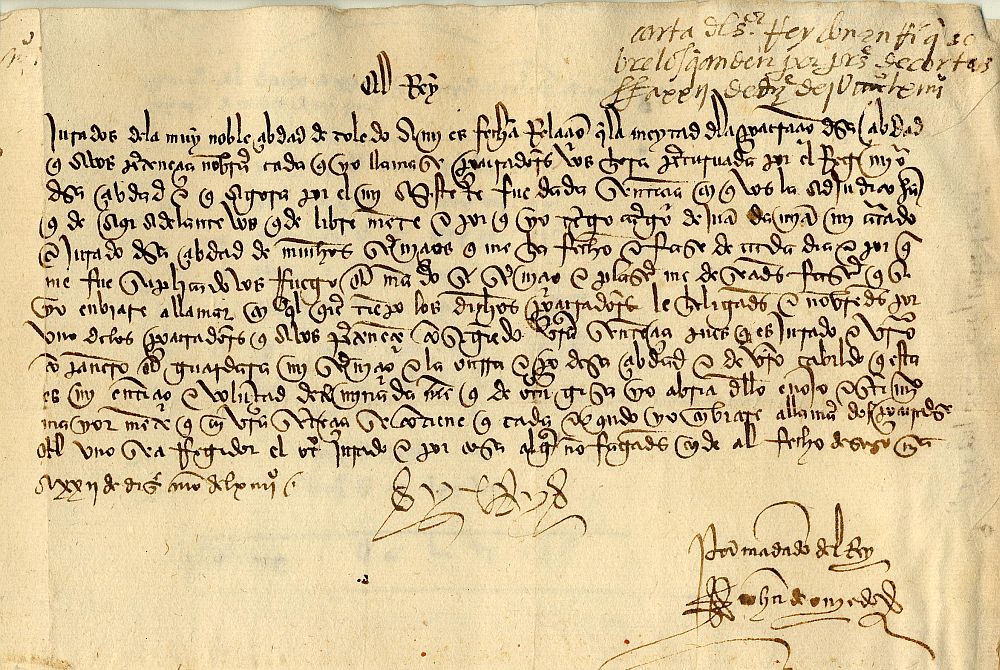 Currently, there are many projects of digitalization of primary sources in all the great archives and libraries of the world as a method of preventive conservation. In this context, the E-Codices project is inserted in Switzerland, which has received financial support from the Andrew W. Mellon Foundation and the Stravros Niarchos Foundation; Digital Scriptorim in the United States, Hispanic in Spain, Gallica in France and many others. But basically, the only thing that these large projects provide is a digital reproduction with which researchers can work comfortably. However, the great inconvenience that sources have regardless of their support is readability. Something as elementary as reading can be really problematic as can be seen in the following image.

Therefore, today, many international projects on paleography inserted within the Digital Humanities stream coexist. Some of them are:

DigiPal, directed by the Department of Digital Humanities at King’s College London, analyzes medieval English writing between the years 1000 and 1100.
ETANA is an interdisciplinary digital project on cuneiform, Sumerian and Acadia writing between the University of Birmingham and the British Museum.
CENDARI is what is called the project of transcription of manuscripts and medieval archival materials, designed to assist users in reading primary sources
EMMO is a multidisciplinary project of the Institute of Museums and Libraries of the United States (Washington) that seeks to encourage general public access to manuscripts in English of the 16th and 17th centuries through the transcription and creation of databases.
ViGOTHIC is a Spanish project that evaluates whether software such as the one developed by DigiPal for the digital paleographic analysis of sources is useful for contextualizing time and space of manuscripts in Visigothic writing. Through a case study, Blessed of Silos, the project focuses on applying this software, comparing it with traditional manual analysis, and seeing what advantages and disadvantages it has or may have.

HandsandBible is the frequent denomination adopted by the Dutch project “The hands that wrote the Bible: Digital paleography and written culture of the Dead Sea scrolls”
Spanish Paleography Digital Teaching and Learning Tool is the palaeographic project developed by the University of New York for the reading of manuscripts in Spanish from the colony of Hispaniola (now the Dominican Republic) between the 15th and 18th centuries.
All of them try to facilitate the office of historian although in a limited way to certain periods, countries or writing cycles and even favor the scientific dissemination of certain books or documents. Specifically in Mexico, a paleographic digitalization and transcription project on the Mendoza Codex has been developed.

However, despite all the technological advances, the job of paleographer and palaeographic discipline is difficult to disappear given the diversity of ductus existing within each writing cycle in each country and it is that basically there are as many fonts as people inhabit the world with the ability to write since no one writes exactly like another person, not even expert counterfeiters are able to reproduce 100% a type of handwriting. Therefore, until technology progresses in this direction, paleographic knowledge will be essential for any researcher who manages primary sources and in all likelihood numerous paleographic transcription projects will continue to be developed.